Microsoft has worked hard in making the Xbox One more than just a video game console. By improving the Xbox One as a strong multimedia machine for web browsing, integrating gaming, video streaming, and more, it is natural that the Xbox One can support a traditional input method like a keyboard and mouse. It is a great idea to use a keyboard and mouse with a home console, and it makes a lot of sense. Imagine Inputting text would become a lot easier, as same as it would be easy for navigating the UI and menus. 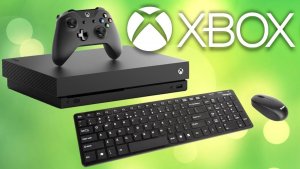 How to Use the keyboard/mouse on XBOX one

The Xbox doesn’t have a ton of USB ports to spare, Microsoft’s console supports third-party USB hubs, such as Anker USB 10-Port Hub.

If you’re looking for a cheaper alternative, some keyboard brands like Logitech provide a USB port on the keyboard itself. This means you can also plug your mouse into your keyboard while the keyboard’s USB plug is placed into the Xbox One.

Microsoft doesn’t have any officially released keyboard and mouse that support on their Xbox One console. So to use your keyboard and mouse, you will need an input adapter to translate their input into the signal that can be understood by your console. Here are a few products that may help you need.

CronusMAX is a controller converter that enables a crossover controller connection. You can use it to connect your mouse and keyboard to your Xbox One. To do it, you need to:

It is an input adapter designed specifically for users who want to use their keyboard and mouse or other input devices with their consoles. It brings you a better experience, as you won’t need a computer to connect your devices, and it also has very low input lag. The setup process for this device is simple. You have to use a USB hub to connect your keyboard, mouse, and controller. Then you connect the hub to XIM Apex and plug it into the Xbox console. And with a little bit of software configuration, you are be able to use your keyboard and mouse on your console.

The Titan devices also have crossover gaming features. There are two generations of their products; both of them can solve your problem. Titan One works in the same way as CronusMAX does. You will need a computer to direct your keyboard and mouse signals to a adapter and then to your Xbox One console. On the other hand, the titan two is an “all-in-one” device. It supports the direct connection of your input devices to your game console. This means that the configuration is easier when your keyboard and mouse is directly connected to the adapter.

Razer is a company known for PC gaming peripherals; they announced that they partnered up with Microsoft to create a wireless keyboard and a mouse setup for Xbox One, dubbed the Turret. These keyboard and mouse combo will feature a dedicated Xbox key that will allow the users to access the Xbox One dashboard. In addition to this, the Razer Turret will also feature Xbox dynamic lighting and also a mousepad that slides from underneath the keyboard.

Razer-Turret for Xbox One is a wireless mouse and keyboard pairing, which will allow you to play games on Xbox One without any cringy cable management. The provided pairing also has a 40hr battery life before charging.

Microsoft is pledging that this list will be continuing to grow more, so gamers can expect more titles in the near future. In addition, expect to see keyboard and mouse support for more of Triple-A titles.

Xbox doesn’t have keyboards as a standard; they have gamepads or controller remotes through which you play games, in the article we discussed how a keyboard and a mouse could be used on an Xbox to make your experience better in gaming or searching anything. Having a keyboard and a mouse will let you scroll and type more quickly and easily. We discussed the steps and the devices which may be required to make it possible to use a keyboard/mouse on the Xbox. We hope that this article is useful for you and provide us feedback and experience from our content. You can contact us on the provided mail for further questions and discussions.

1. How to play using a keyboard/mouse with ps4?

There are certain keyboard and mouse combinations that are built specifically for PS4 gaming. One of these is HORI Programmable Keypad and Mouse. Instead of the letters or numbers, its keys are so designed to let you control the games and move around menus. If you’re out of the spare USB ports on the console, the Playstation also supports USB hubs, such as Anker USB 10-Port Hub that allows you to plug in many devices using only one port.

Many keyboard manufacturers such as the Logitech provide USB ports in their keyboards themselves, which means you can plug your mouse into the keyboard, and then the keyboard into the console.

2. How do you appear offline on an Xbox?

If you really want to make your profile appear offline to everyone, then the process is quick and easy.